Since 1973, in any of the Seattle Post Intelligencer's buildings, one figure has been a constant in a newsroom that's a microcosm for the turbulent last few decades in news media.

Chances are, at any given hour of a weekday, if you stumble into the P-I newsroom you've seen a man hunched over his desk, furiously typing or grumbling to himself after a politician blew him off over the phone — although sometimes the grumbling was instead an exclamation of triumph after a particularly delicious interview.

The unwavering pillar of the P-I's recent history was Joel Connelly, who announced his retirement from both the outlet and journalism on Tuesday via a Facebook post. He made sure to "leak" the announcement to his editor the night before. He'll be on staff through the end of June.

The email and post were typical Connelly style; he made self-deprecating quips and injected a bit of his ego. Ultimately he ended the post with allusions to anecdotes and a subtle way to sum up nearly half a century with one paper: "A good run." 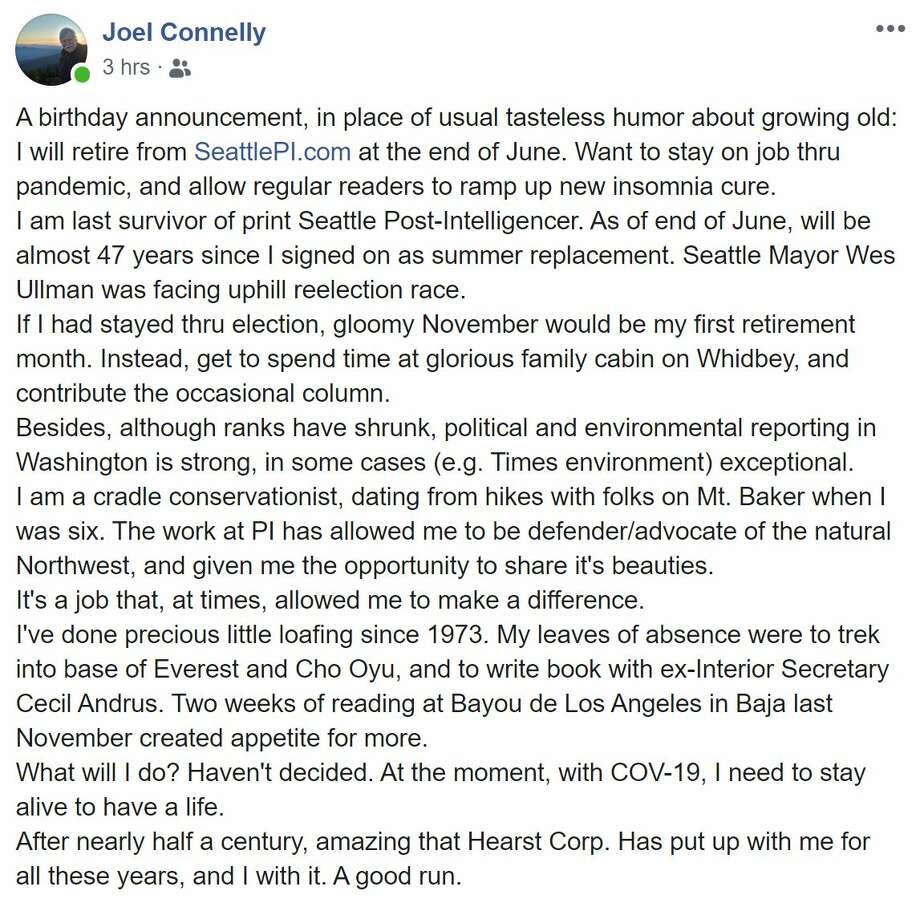 After 47 years at the Seattle Post-Intelligencer, Joel Connelly announced his retirement on March 31, 2020.

After 47 years at the Seattle Post-Intelligencer, Joel Connelly...

When asked to give a quote on his time with the P-I, Joel said, "When we were on strike, at a particularly tense moment, I told a TV reporter: 'I cherish my job, but I cherish those I work with.' Same goes today."

Hired on as a summer replacement in 1973, Joel has been etching the print and web pages of the P-I with his sometimes wry humor and fierceness for 47 years. In that span, he spent time as a news gatherer, national correspondent, a D.C. correspondent, education reporter, energy reporter, and lately as a political reporter and columnist. In 1983, he was part of the P-I staff that was a finalist for a Pultizer Prize for its coverage of the collapse of the Washington Public Power Supply. In Joel's words, he had a large part in the reporting.

The P-I was beaten by the Jackson Clarion-Ledger which exposed the need for public education reform in Mississippi.

"Unlike us, they were able to actually fix their situation, so they deserved the Pulitzer," Connelly said.

Another highlight of Joel's career was early on, when he was covering Seattle Mayor Wesley Uhlman's reelection campaign. At a news conference, Joel said Uhlman was sidestepping any chance to publicly name his opponent — who turned out to be a city councilmember at the time. Joel grabbed coffee with two people he knew, local democratic party members who blurted out the name.

It promptly appeared the next day under Joel's byline.

"My friends caught hell for naming the mayor's opponent, but it was then that really established the iron rule of the profession for me," Connelly said.

Joel held a lifetime of knowledge about the Pacific Northwest. He grew up in Whatcom County, not far from the 凯发k8地址hometown of another iconic journalist, Edward R. Murrow. Joel left the state briefly for a few years at Notre Dame, as well as a few summer quarters at Western Washington University. After school, he got a job with the P-I and never looked back.

When stories were bounced around in the newsroom and any politician from the past 40 years' name would pop up, this would see the top of Joel's head lean back as he pulled a story of the subject from his arsenal. It was usually either embarrassing, personal or a combination of the two.

Joel could tell you the story behind the P-I's connection to the Roosevelts, or the unheard words of a local politician on a hike in the Cascades.

One of his personal favorite stories of his time at the P-I was when the paper sponsored a ski school and had t-shirts printed with an unfortunate acronym for Post-Intelligencer Ski School.

He's been with the paper so long in fact, that late in 2018, when Hearst wanted some stories to celebrate the P-I's 155th anniversary, the newsroom calculated how much of the paper's history of which Joel had been a staple. He'd been typing away, pumping out stories with an incredible work ethic for 30% of the P-I's run. He was also the last survivor of the print edition of the Post-Intelligencer, which ended in March 2009.

This won't be the last of our coverage of Joel Connelly. If you have any memories, photos or embarrassing stories of the man of the hour, please send them to alex.halverson@hblandaofu.com.

When a President's son-in-law and daughter ran the SeattlePI