﻿ What's next for the West Seattle Bridge? Here's what we know - hblandaofu.com

What's next for the West Seattle Bridge? Here's what we know

Photo: GRANT HINDSLEY, hblandaofu.com
What's next for the West Seattle Bridge? Here's what we know
1  /  1
Back to Gallery

The future of the West Seattle Bridge, which closed on March 23 due to cracking along the center, is still up in the air, but officials are now considering other alternatives such as a tunnel to connect West Seattle with the rest of the city.

The city currently has two options it is evaluating: repair or replace the bridge, which carries an average of 100,000 vehicles and 25,000 transit riders a day. The Seattle Department of Transportation is currently analyzing the structural stability of the existing bridge and expects to make a decision on the future of the bridge this summer.

"While we do not have all of the information yet, we are beginning to better understand what tradeoffs and rough timelines could look like for repairing or replacing the bridge," wrote SDOT on their blog. "Our ultimate goal will be to restore the critical transportation connection of the West Seattle High-Rise Bridge as quickly as possible, in the safest, most effective way that puts the needs of the community and urgency of the situation front and center."

A newly released timeline predicts that if the city decides to repair the existing bridge, it would take until 2022 to complete while constructing a new bridge would take four to six years to complete, placing reopening between 2024-2026. 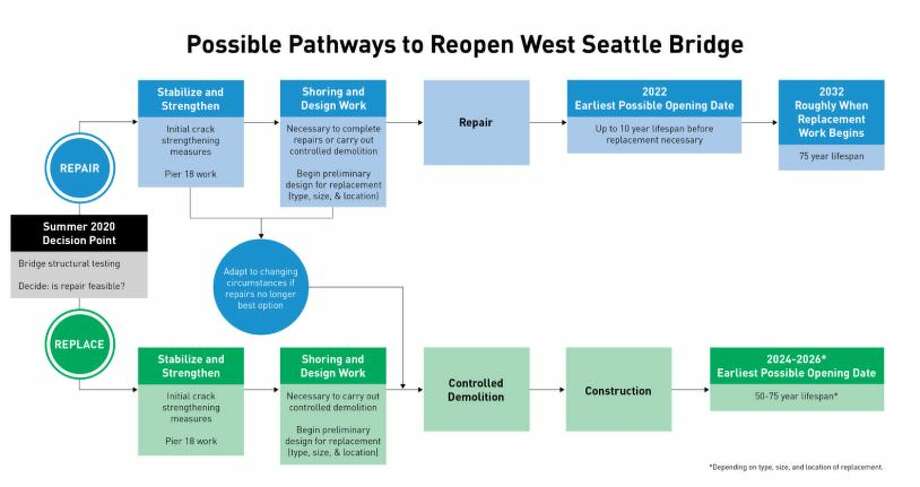 In the case that repair becomes an unviable option in the coming months, SDOT has since opened up bidding for the construction contract to design a replacement to the bridge. The multi-year contract is estimated to be between $50 and $150 million.

"We are looking for designers who can commit to be available when we need them over the next decade, in case we are able to make short-term repairs now to reopen the bridge sooner, but then still need design support to replace the bridge a few years down the road," wrote SDOT.

The RFQ now reads: "Other replacement alternatives will be evaluated as part of the contract, and will include but may not be limited to tunnel and Sound Transit coordinated options."

The addendum comes in response to a proposal for an immersed tube tunnel (ITT) by Bob Ortblad, a retired Civil Engineer who teaches at the University of Washington.

"An ITT can be built much faster and cost less than a new bridge," wrote Ortblad in an op-ed published in Westside Seattle. "A tunnel offers a simple and economical design for light rail. One of Sound Transit’s proposed routes to West Seattle is north of the swing bridge. It would be an ideal location for an ITT because construction could start even while the current bridge is being shored or later demolished."

Similar ITT designs have been built in British Columbia under the Fraser River to connect Richmond and Delta.

In addition to being more cost effective and easier to build, Ortblad also contends that an ITT would be a safer alternative to a bridge in the event of an earthquake.

"An ITT is an ideal soft ground solution. Its natural buoyancy, makes it almost immune to earthquake liquefaction," Ortblad wrote.

In response, SDOT says they are "seriously considering all options at this point" and "are still working to understand the tradeoffs of other options, such as a tunnel." However, some officials believe a tunnel would not be a feasible option.

“You have very significant elevation changes that alone would be challenging,” Port of Seattle Commissioner Peter Steinbrueck said.

Whether the city decides to repair or replace stabilization of the existing bridge remains a priority for public safety. SDOT plans to begins strengthening work such as "wrapping the bridge support structure with carbon-fiber reinforcement" and repairing locked bearings at Pier 18 this summer.

"We will continue to look closely at all options, and plan to work with community leaders and technical experts to reach a decision this summer," wrote SDOT.